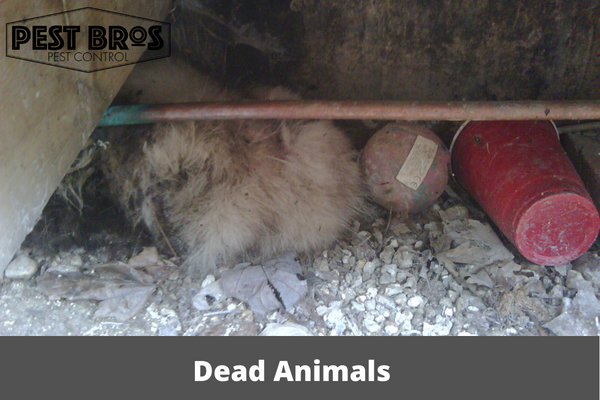 If you have an animal that dies on your property, you must find a solution for disposing of the deceased body. It becomes your problem and your expense, especially if you have to come to the point where you have to hire a professional. The situation must be handled quickly because leaving it will cause additional issues such as foul odor, stress, parasites, pests, insects, or animals that want to feed on the carcass.

You even run the risk of hazardous scavengers entering your property if a larger animal dies there, for example. Depending on where you reside, this might be anything you don’t need or want. If an animal is left to rot, it will also end up infecting the surrounding soil and water supplies with various dangerous diseases. Thus, call a professional pest control company if it affects areas near your home or property.

What Do The Experts Have To Say?

Squirrels, raccoons, mice, stray cats/dogs, rats, opossums, and our favorite skunks are among the most common animals found dead within and around homes. The odor that the animals emit after they die can fill the home with an aroma similar to rotting flesh, with several comparing it to an open sewage system. If a skunk’s smell is not removed quickly, it can linger for several weeks or even months. If there is a dead rat in the wall that you cannot remove, expect the smell to stay in the air for about seven to ten days. However, it will take several weeks for the odor to disperse in a raccoon or wild boar.

You’ll have early warning signs if a squirrel or rat dies in your attic. Many little critters prefer to crawl into the darkest, tightest spaces and die. Typically, you will hear a scratching on the wall for a few days, followed by silence for several days, and then:

You can’t always use odor to determine where the dead body is because, even if there is a rotten, strong odor inside your home, the animal could be in a doorway well or under the deck. It is just that the smell was trapped inside the house.

How Do Professionals Work?

The very first thing an expert will do is conduct an initial inspection in the place to determine which animal they are looking for and where it isn’t. This is known as the elimination process.

They can tell what kind of animal it is by how strong the odor is and how long it has been present. It will not only tell them the size but as well as the species. They examine the house’s structure to see if there are any gaps an animal could enter. This eliminates potential locations for the carcass if the place is tightly closed.

The presence of parasites and pests, such as flies in a large group or a specific area, will signify where the body is situated.

The death of animals is an unfortunate part of life, but we can always ensure that they are appropriately buried if they die on or near your property. Just make sure you do it legally, safely, and without risk. Thus, if you or your families have encountered one, don’t hesitate to contact The Pest Bros.